On the Subject of One Alexander LaVelle Harris 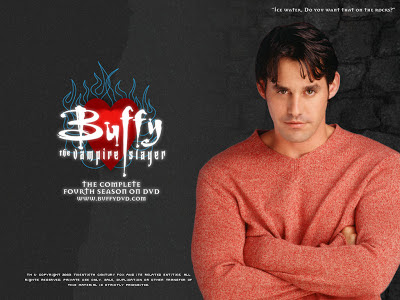 I recently watched Graduation Day Part 2, the season 3 finale of Buffy the Vampire Slayer. It has probably been about three years since I last watched it- and before then I probably hadn't watched it since 2004.

For the years 1998 through 2002, BtVS was a giant obsession of mine. By the time the show had ended in 2003, I had experienced way too many emotions towards the show. I bought the commercial VHS tape 6 episode set series for the first three seasons, the dvds for the first three seasons, and a ridiculous amount of tie-in books that I could devour 3 a day without even trying.

Now, ten years after the show ended, I've changed a decent amount. I no longer believe that Joss Whedon can do no wrong- but I do still like him a lot and am thrilled that he's now a bigshot. So, I guess I'm looking at these episodes with different eyes.

And I still love Graduation Day... but I also see a few more flaws that I remembered. I always thought of the show as flawed and that being part of the charm- making the beauty more beautiful in direct contrast.

I never really felt that before. Sure, I thought it was pretty terrible when he didn't tell Buffy that Willow was trying to restore Angel's soul in Becoming Part 2- but his motive was understandable. I never really understood all the fanfics that felt the need to re-hash that moment and "punish" Xander for his actions in that episode.

And, for the most part, I can understand his stupid comments to Angel most of the time in season three. It's part lingering jealous, part anger about what Angel became, and also just that feeling of having to witness your best friend be in a terrible relationship that can't end well.

But they really should've nipped his snide comments in the butt when it comes to Cordelia after Lovers Walk. Or had Buffy slap him. The girl almost died because of his stupid hormones and jealousy issues. She was skewered through her abdomen because she fell through a flight of stairs after trying to run away in shock after discovering her boyfriend kissing another girl. Yeah, maybe he did redeem himself a bit by paying for Cordelia's prom dress, but I can't sit through them sniping at each other over Wesley and think that Xander has any right to talk to her like that.

However, I am still on the side of feeling that Xander's character was slowly and painfully assassinated over the stretch of seasons 4 through 7, and the first of the characters to be whittled down to a 2-D parody of himself. My stomach still turns to think of the terrible wedding episode. Part of the issue was that Xander was at times basically the "token boy" where most other shows would have a "token girl" in a male dominated cast who was just there to be girl-y. His second biggest character trait (after wise-cracking) was "male"- for all the wonderful fleshed out characters on the show, Xander never really got the same treatment. Xander-centric episodes involved him getting possessed or having a "wacky" encounter with the supernatural. The season five episode, The Replacement, being the one big exception. But, also, it took FIVE SEASONS to get that episode- and then it seemed like the writers didn't really know what to do with him later on other than relationship stuff.

And, by season seven, he was mostly reduced to being kind of a pervert- something that was more excusable when he was a high school kid. But on a 20-something? Gross.

My point stands, however: Xander was kind of a dick. It's amazing he didn't get hurt more than he did.