Greetings From Inside The Polar Vortex 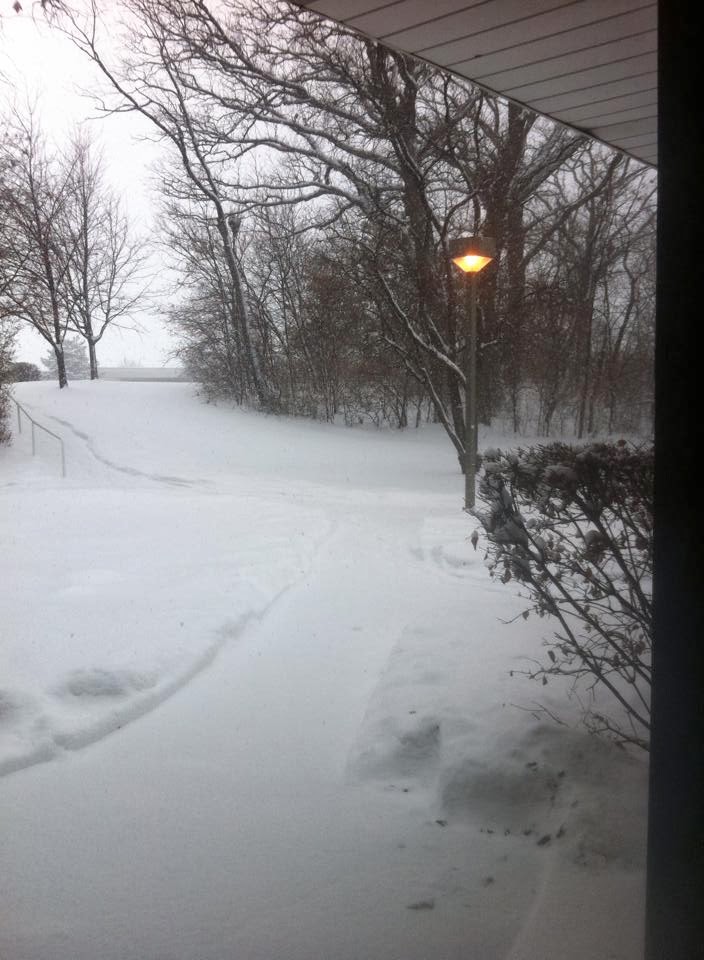 The picture shown here is actually from before the Polar Vortex. This is from last Thursday, also known as "We Were Idiots To Come To Work Today" Day. That was taken about an hour and a half after the sidewalks had been snowplowed. Yeah. To guess what it looks like today, add another foot and a lot of scary icicles.

This has been my sentiment for years, but the two hours I spent shoveling my car out of a snowdrift this morning certainly hit that point home for me again.

Thankfully, some "Shoveling Angels" came by and pushed my free in time to escape a parking ticket (although, odds are that the village is giving a grace period on our 8 AM to 10 AM mini-ban on Tuesday and Wednesdays and I didn't need to worry) and make it to work only an hour and a half late.

Are "Shoveling Angels" a thing for areas outside Chicagoland? Or is it up there with marking your parking spot with old furniture once you've dug it out?

Shoveling Angels are people that walk or drive around after (or during) extreme weather in the means of helping anyone they see that needs help. Often, it's a couple guys walking around with shovels thrown over their shoulders. The folks that helped me were a bit more prepared- they were in a big mother-effin' truck with several shovels. They may had also had a plow on the front of the truck, it was sturdy enough.

After they got me out of my stupid snowdrift, the man did politely ask for a couple dollars in return as I was already reaching for my wallet. I gave him most of the cash I had on hand, wishing I had a spare gift card of some sort to give him as well, but I did not. At the very least, I wanted to help cover the gas they were using to get around, not to mention something for the mere fact that I was terrified I was going to drive over the poor gentleman's feet at some point.

It's pretty typical to tip or gift the Shoveling Angels. It's basically an extended and more urban version of the boys that go around shoveling the driveways of everyone in the neighborhood. Yesterday, I saw a couple guys walking dow the middle of my street with shovels and then when they were walking back, they were shoveling the sidewalks in front of any buildings that hadn't had their walks already shoveled enough. Our walk was already shoveled, but I sort of wished I could quickly make some water or coffee to take out to them. They were out for hours and it really wasn't safe conditions- not to mention the lack of safety of walking down the middle of an icy road.

I'm so thankful for the existence of nice people like this, but at the same time, this past week has definitely soured whatever kind feelings I may had redeveloped about winter weather. If it wasn't for needing to be close to my family and being committed to my lease for another six months, I'd be dropping everything to find a way back to Arizona right now.

Hell, by the time I got to my office (a whopping hour and a half later than planned, as it took more than twice as long to make the drive for some reason), I had to really remind myself that I couldn't just drop everything and head for warmer climates.

I'd be heartbroken to not be able to see my sister's family as frequently as I have in recent months. My roommate would be shit out of luck if I left. My two retail jobs would be okay, but my office job would require at least several weeks of transition work and would struggle to cover for me at the upcoming conference at the end of this month.

But I want to leave. So much.

If I could get a really well paying job that allowed for me to live anywhere at any moment, allow for frequent trips to see my family (like, twice a month) while also letting me live where ever I wanted to be the rest of the time.. That would be lovely.