Close Your Eyes and Think Of Anne Shirley

"I think amethysts are just sweet. They are what I used to think diamonds were like. Long ago, before I had ever seen a diamond, I read about them and I tried to imagine what they would be like. I thought they would be lovely glimmering purple stones. When I saw a real diamond in a lady's ring one day I was so disappointed I cried. Of course, it was very lovely but it wasn't my idea of a diamond." - Anne Shirley, Chapter 13 of Anne of Green Gables 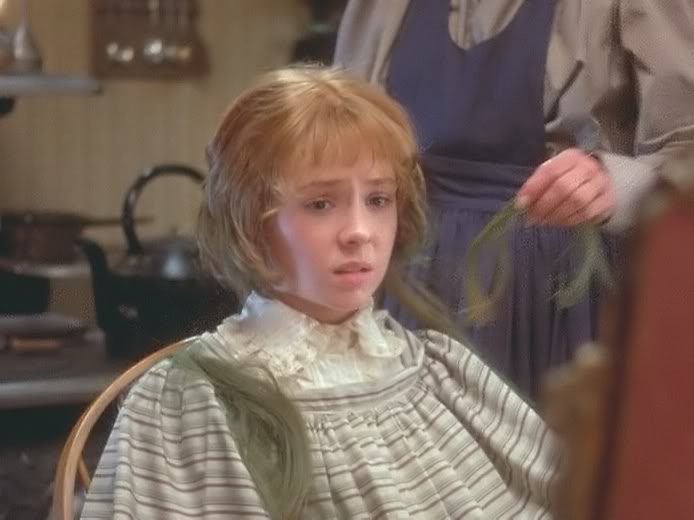 I possibly think of Anne of Green Gables too often. If there is such a thing. The above quote is not especially important in the grand scheme of things or even the grand scheme of the fictional life of Anne Shirley, but it's one that bounces in and out of my head with some amount of frequency. And has nothing to do with the picture I've chosen from the classic TV special, other than how I always was amused with the thought that Marilla decided to give Anne some fringe when she had to cut the green out of her hair.

Of course, I think of Anne's quote about diamons when I see almost any precious stones matched with their proper names for the first time. I've never been one to really pay attention to them, as I like glass pearls for my jewelry and my birthstone is the color of B12-infused urine (also known as "topaz"). So, the one year I went to the Gem Show in Tucson and found myself surrounded with little (and gigantic) stones I was unfamiliar with, Megan Follows's voice saying that line was ringing through my head all day.

But it's not just that. Anne Shirley, although she is fictional, is speaking for readers in that moment. Those of us that grew up with our noses in books and knew the meaning of words we had never heard outloud. Knew of hundreds and thousands of items outside our daily lives only by the beautiful twists of words an author had used to describe those items. And where the author failed to describe an item enough- either for assume the audience would know or to be vague enough to let the reader fill in their own gaps- images still appeared in our heads. Forming an alternate reality for each reader, where the spaces were filled with details that had to come from their specific history and life.

Colin Shepherd has a piece in The New Yorker today about a similar issue. Except instead of diamonds not living up to expectations, he writes of the Met and how it's missing something he desperately wanted, an item of mythology in his childhood: the bed that Claudia picked out for sleeping in when she and her brother ran away to live in the Met in From the Mixed-Up Files of Mrs. Basil E. Frankweiler. The Met no longer has that specific bed on display and it's resulted in the museum becoming a sore spot for Shepherd, for crushing his hopes of one day being able to see that same bed that Claudia described.

And, in this era of visual adaptations of everything, the quote also comes to mind almost every time a beloved book is adapted into film, television, comic book, ect and what-have-you. It came to mind, most awkwardly, when a portion of Hunger Games fans reacted not-so-well to finding out that they had managed to just not realize that Rue was black when they read the books and then made racist fools of themselves for complaining about the casting of Amandla Stenberg.

But, even so, their complaints would not have suddenly become justified if it had turned out that Rue had at some point been described as having light skin. Because it's a little ridiculous that something like the Hunger Games in those books, which specifically pick two random kids from each of the districts in what used to be North America, would have that many caucasian-y looking kids selected. But... whatever. That's an argument for another day.

The point being: that twelve-year-old Anne Shirley just assumed that diamonds, the beautiful rare stone that was mentioned so much in stories, would be purple. Because that was what was beautiful to her. And that realizing that diamonds were not purple made her feel like her world fell appart for a day. Maybe she didn't realize exactly why, and maybe I'm reading too much into Lucy Maud Montgomery's writing, but in more recent years that moment has struck me as Anne realizing that what she values isn't eye-to-eye with what the world at large seems to value. And she was scared and sad to realize that.

It's like the moment where you realize that racists still do really exist. Or, say, the moment you realize that some small minded person was so offended that a teacher grieving the death of her mother happened to give another woman's name as her partner in the obituary that the small-minded person wrote to the teacher's Catholic school and got her fired after 19 years of employment. And that small-minded person and the school feel that they can rationalize their spiteful hateful decisions by claiming that loving the people you love falls under "immorality or serious unethical conduct" yet sending a hateful letter to get someone innocent fired from their job- that's not also immoral or seriously unethical? I know the parent is not an employee of the school, but they should be ashamed of themselves.

This post went in a million directions I didn't intend to originally send it in.
Posted by Lamb at 6:59 PM