I don't know if it's because of the whole Girl Meets World internet frenzy or what but suddenly Clarissa Explains It All is back on people's minds. There's a book coming out that will follow Clarissa later in life and Splitsider recently felt the need to dig up the sad awkward pilot of the not-picked-up Clarissa Now spin-off show and tell how it went wrong. And it brought up an old concern of mine.

Clarissa Explains It All was the first TV show I really obsessed about (and the first show that I was sad to see end, but desperate to catch the finale of it), so I think I can talk some-what knowledgeable on the subject.

I wanted the window seat that she had for the later seasons (the Darling house had some major renovations between seasons- including a second stairwell), I shared her love for small weird cars, and I loved all her weird fantasy sequences. And when my family moved (a good five years after the show ended- which when your 15 is an eternity) and I was given a bedroom with the giant sloped ceiling walk-in closet, I immediately thought of how Clarissa had set up hers. Mine never looked nearly as good.

The thing that really gets me, though, is that while Clarissa could've aspired to be everything and anything (and often did!), the writers chose to have her want to be a journalist. I feel like a lot more people on TV end up wanting to be journalists than actual people. Probably because people on TV are written by writers, aka people that wanted to write for a living and now do. Hell, even Sabrina the Teenage Witch went down the exact same road. Maybe Melissa Joan Hart wanted to be a writer?


In both Clarissa and Sabrina, the journalist thing bugged the hell out of me. At the start of Sabrina, she was a science nerd. I really appreciated that and I wish they had kept that her passion.

And as for Clarissa, she could've been anything and was enthusiastic about everything. Wasn't that what the show was saying in every episode? Showing that the possibilities were infinite for a smart girl in the 90s.

She could dye her hair black and really get that rat tattoo and become the hard-edge Jade. She could start a small business like she and her mom almost did with their Bouncy Balls recipe. Or go into marketing, as she had a clear vision when they were trying to market the treats. She could become a professional thief like when she accidentally stole a bustier. Or a spy, as she loved to pretend to be someone she wasn't and was always up to solving a problem when it was presented to her.And, yes, she could possibly go into fashion. I loved some of her styles. No one else on TV dressed like she did.

But you know what skill Clarissa was obviously oblivious to her talent for? Game design! The girl would quickly whip up a new video game to help her get through almost every conflict. Can you imagine the great games she could've created in the early days of flash and java on the web? They'd be better than what Nickelodeon offered on their AOL site in 1995, I promise you that. And then she'd make a killing with apps! And probably not only do game apps but I bet she'd be pretty good at making a handy productivity app or two as well. 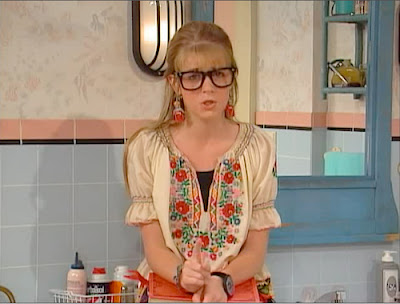 Email ThisBlogThis!Share to TwitterShare to FacebookShare to Pinterest
Labels: Clarissa Explains It All, journalism, Sabrina the Teenage Witch, smart girls, writing on writing