So Sleepy, So Hollow 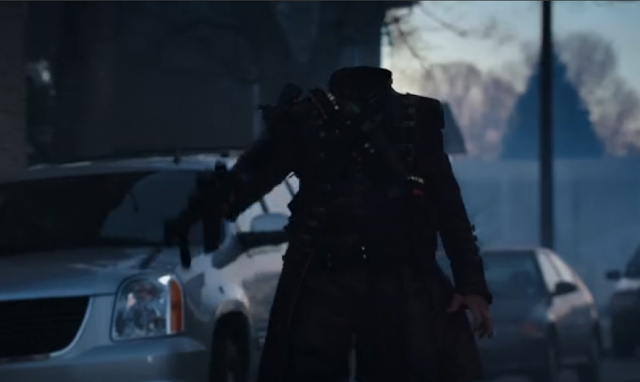 At one point in the pilot episode of Sleepy Hollow (which you can watch on Hulu, here), the Headless Horseman gets a gun and starts shooting like crazy... and, because it is TV, he does not successfully hurt or kill anyone.

But, I realized, he was doing pretty good for a headless guy. At least he was aiming in the correct general area! And, of course, now I must bring up the beginning of David Sedaris's famous "6 to 8 Black Men" essay.

But back to Sleepy Hollow. It was... good-to-average? Great guest stars for a pilot- John Cho and Clancy Brown both bring a lot of credit to the show. And hopefully, the show will continue to play recordings of Clancy's amazing voice, as no one can read slightly-religious-end-of-days text like Clancy Brown can (except for maybe Kiff Vanden Heuvel from Bioshock Infinite). And it's kind of sad how nice it is to see a genre show with a black woman as the leading actress. It's really nice, actually.

And Orlando Jones doing dramatic acting! I've had a weird soft-spot for Orlando Jones for years, mostly from that two year period where he was almost famous- between The Replacements, Evolution, and the 7Up commercials (did he also do collect calling commercials? I think he did). So it's really nice to see him proving himself as being able to tone it down and be a stern authority figure.

I just wonder if the show will keep its momentum or slow to a deadly crawl. Fox really struggles with genre procedurals (that are not The X-Files) and I worry that it will fall into the same issues. Because it does really feel like a Fox show. Like Fringe and New Amsterdam had a baby. Maybe with a touch of Bones and John Doe.
Posted by Lamb at 9:54 PM