Take Control of Your Weekend!

When one is looking at a really crappy few days of MRIs and invasive medical appointments... sometimes it helps to schedule some fun with a friend in between it all.

Rather than try to type it all out, I'm just going to link to the episode of his podcast we recorded. And I'll mention that the episode was recorded on my iPhone after my MacBook Pro suddenly acted up for the first time in the 7 years I've owned it. It took 40 minutes to open up Garage Band for some reason. And then as soon as I got home that evening, it was back to its typical self.

We did have a handful of bad luck moments- but never anything terrible. I somehow managed to print out only the confirmation and not the tickets for the Cubs game, but we solved that quickly. Driving out to House On The Rock took ridiculously longer than we thought it would, but we saw it all (rushing only through basically the dollhouse and doll sections of the third building). We were stuck behind a grandma driving way too slowly when we were pressed for time to get back to Milwaukee, but still got awesome seats for the second Cinematic Titanic show (which was ah-may-zing). We had a lot of trouble finding restaurants that were open after 10 pm on a Sunday night, but eventually found a Portillo's. So on. So forth.

Also, we're convinced there's some seedy underbelly situation with The House on the Rock. As mentioned in the podcast, you really get the feeling that there is more behind the little fake cobblestone streets and giant collections of self-playing instruments than just that the guy liked to collect things. The first area you walk through, before going into the living area of the house, is a museum dedicated to the guy that build the House on the Rock and it's so bizarrely propaganda-y that it doesn't make sense.

And I really don't know how to stress how amazing Cinematic Titanic was. 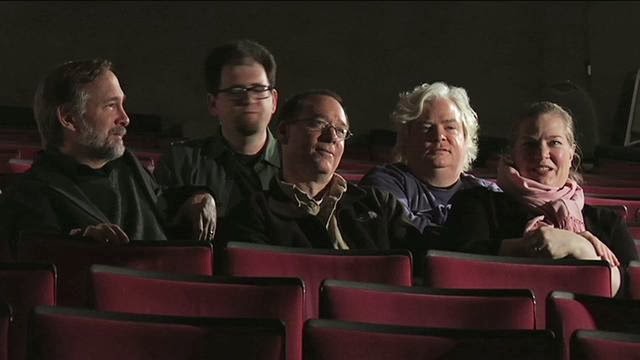 And how awesome Dave "Gruber" Allen was as a warm-up act (I will never forget him dancing to "Bye-Bye-Bye"). Special mention must go out to Mary Jo's impression of a West Wing background character and J. Elvis's amazing airport tribute band. As for the actual riffing... it was THE BEST. As much as I try to not pick favorites between Cinematic Titanic and RiffTrax, the CT team does tend to be more natural and make the script seem more improvised. And being with a live audience just makes everything so much better. And it really makes a difference to have Mary Jo on the cast, as there's a definite benefit to having an actual woman to pretend to be the voice of the female character rather than the guys doing falsetto all the time. And Mary Jo tends to get the really sly joke that gets an overwhelming (and deserved) response.

The second night was Danger on Tiki Island, which they have done numerous times and were clearly having fun with it. Patrick noticed that the cast was looser with the f-bombs and general swearing. But there's also just the plain fact that the film is nuts and perfect for mocking. As that movie started and the first few lines were thrown out, the uncontrollable thought of "I want to do this every night." flooded my brain. Even with the drive to Milwaukee, the parking price, and the price of concessions... if I could go to Cinematic Titanic every night, I think I would until I went broke.
Posted by Lamb at 12:55 PM