Back To Who: My Favorite Part of The Stolen Earth

Nope, it's not the return of any of the characters. It's not Rose Tyler and her giant gun. It's not even that Joss Whedon-style romantic comedy-turned-horror-movie ending.

It's when the Doctor and Donna are at the Shadow Proclamation and the Doctor asks to be shown the missing planets.

And rather than just running around the tables like a normal person, he feels the need to have one of his steps fall on the ottoman/seat in the middle of everything.

I have a theory that David Tennant asked for something to be put there to make his movement a little more interesting. If there's something for him to climb on, bounce off of, or walk on in an un-traditional way, he usually does (and that's probably how he got those terrible back problems around the time he did Hamlet for the RSC). But this seems to be the most poorly integrated attempt in the entire length of the series. That little ottoman is so out of place, on top of everything. All the other furniture is glass and steel and then there's this little pleather thing that looks like it could be bought in Target. 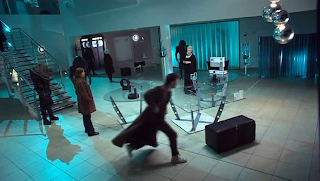 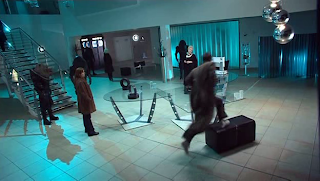 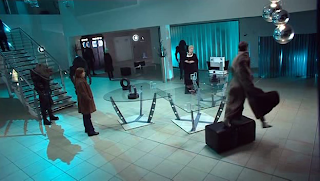 It does make the coat look great, though, I have to admit.