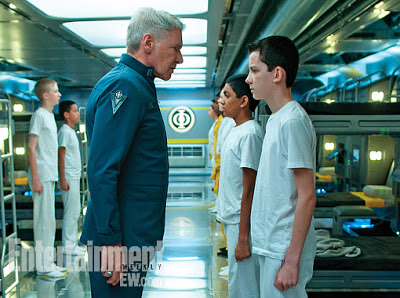 So... DC and Summit have apparently just arrived in the 21st century and realized, after already hiring Orson Scott Card, that he's a bit of a controversial figure. Something I figured out when I was 15 and, after having read all of Ender's Game, purchased a copy of Speaker for the Dead and made the mistake of reading the foreword by Card. And then attempted to also read Speaker for the Dead.

At that time, the only other book I dropped like a hot potato was Jany Eyre. Because as much as I loved Jane and her "I will dress plainly because it's how I like to dress dammit and I will be smart because I want to be dammit again" ways, I hated Mr. Rochester twice as much. Before I even knew he had a wife in the attic. But at least I dragged myself across the stupid "hear him calling me" finish line on that one.

I really liked Ender's Game. It was a great slow-burn to a great final reveal and didn't try to tell you how to feel- it just handed you the facts and let you have your own emotions about what you just read. Speaker for the Dead did the same. But the facts took my emotions to weird and uncomfortable places. More uncomfortable than 15-year-old me was willing to go. I was ready to commit to learning more about Ender's sister Valentine because she seemed like a great character and then... I just didn't feel comfortable reading further. And no one else was very interesting in the story. And I can't even remember what the foreword by OSC in that book SAID now, but I remember that it was one of those moments where I just felt like I had accidentally ended up in line for the men's bathroom when I meant to get in line for the snack bar.

And then, as I got older and times changed, Orson Scott Card revealed himself to have beliefs that I strongly disagreed with. To a point that has left me, and many other people, conflicted about our feelings about separating the artist from their art and when you can take one without the other.

Anyway, here are my thoughts on the Card-fueled Hot Water:

1) I don't know if DC is past the point of no return on their deal with Card, but I know that Summit is- they have a movie. If it's too late to back out, both companies should figure out a way to balance out their dealings with him. Donations to organizations that support Gay Rights would be a good place to start.

2) Summit should consider secretly asking OSC to "disown" the movie and therefore give the impression that they wanted to make an adaptation of Ender's Game based on the material alone and giving the impression that things were being seen eye-to-eye between Card and everyone involved with the movie.. Sort of like how Alan Moore didn't want anything to do with the Watchmen movie (not that I'm suggesting that Moore was asked to disown it. I know the League of Extraordinary Gentlemen story).

3. NOM is a hilarious name for a terrible organization. Hermoine Granger couldn't come up with a worse anagram.

Alyssa Rosenberg has said more on the topic and has said it better than me (and sooner).
Posted by Lamb at 6:13 PM