Hairstyles That Seem Like A Good Idea When You're Still Kinda Asleep: 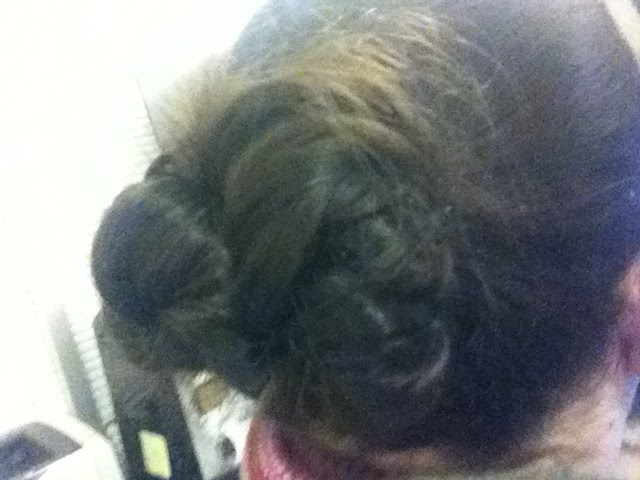 I need a haircut. I have many reasons for needing one- the main one being that my neck is giving up on being able to hold up my head with the current weight of hair I pile up in rubberbands and bobby pins every day. I literally ended up with my head on the bar the other night during a wine tasting because my neck hurt from holding up my head.

I've been trying to remember to spread the wealth so that it's not just one giant heavy ponytail or bun. But I'm also incredibly lazy. Really.

And, also, I usually take about 10 minutes to get ready most weekdays. So... what to do with all that hair in just a couple minutes? When you're not awake enough to figure out that you're already wearing a bra?

Apparently, I just do two buns side-by-side at the back of my head. I didn't remember I did that until I felt back there a few minutes ago.

I wonder what the front of my head looks like?

I kinda want to get a trendy cut for once. But, at the same time, I hate paying for haircuts. Because it's like paying to be tortured for an hour and in the end I'm rarely ever thrilled with the outcome. I can't even sit through a dental cleaning without getting gassed to make the time pass. Also- I can't even begin to ever figure out what looks good on me. Of the past four times I got bangs cut, three times I ended up with just some front stuff framing my face that was long enough to put behind my ear after two weeks. The one other time was a disaster- the woman didn't even pay attention to where all the hair she was cutting for the bangs was coming from- I had a chunk from just to the left of the middle of my head that now had to function as a bang.

My mother has always told me to never go to a stylist and just let them do whatever they want. But my mother also hates the word "boob" and claims she'll disown me if I ever let someone color my hair before I start going grey. That boob thing doesn't really matter, I guess, but I felt like sharing that. She hates the word "boob". That's weird, right? It's not like it's "moist" or anything.
Posted by Lamb at 1:34 PM No comments: