Back To Who: What To Think About Martha Jones 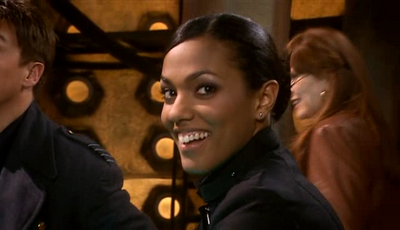 I have a lot of feelings about Martha Jones.

When she first showed up, I was hopeful and open-minded about her. I loved Rose, but I was excited about having a change of pace. Martha was supposed to be a little bit older than Rose, a little wiser and a bright young medical student. I had hoped this would mean she'd be a bit nerdy with the Doctor and a little less reverent towards him.

And from looking at the first three episodes, I think they might've originally intended that for her.

But that damn crush. They gave her that stupid crush on him and made him very harsh towards her in response. I sometimes wonder if Russell made the Doctor extra harsh towards Martha in a way to get the audience on her side. But if that's what he was aiming for, I think he missed a bit as the unrequited love she had for the Doctor made the brilliant Dr. Jones seem like she was a little bit stupid. Why would anyone be so loyal to someone that treated her so terribly?

I loved when Martha would have some attitude. Like her snitty little knock in Human Nature when Matron Redfern tells her she should knock when entering a room. Or when she made the Doctor stop and explain himself on New Earth. The best being when she basically told him to fuck off (not using those words) when her apartment blew up and she was calling her parents. She should've been like that all the way through. She should've been giving him major grief about acting like she was still a guest on the TARDIS rather than looking like she was being given the holiest of communions when he finally gave her a key.

And it kills me that they barely played with the fact that the Doctor was traveling with someone with a lot of medical and science knowledge. Other than in The Lazarus Experiment, you never see her and the Doctor talking about anything scientific together. Martha tells people she's studying to be a Doctor but barely ever shows people (her little lesson to Redfern barely counts). Why weren't there more episodes where she and the Doctor could play off of each other's scientific knowledge to figure out what was going on? Or even by having the Doctor show-off with showing her medical techniques from the future? Would that have been too much to ask for?

Instead, the poor girl was given the worst trips around the universe ever. She gets kidnapped at (fake) gunpoint, almost killed by a giant scorpion-man creature, stuck in freakin' 1913 as a maid for several weeks, briefly jettisoned towards a sun in an escape pod, and then stuck in flippin' 1969 for several weeks. How cruel is it to have two trapped-in-the-past-for-weeks adventures happen to the black companion? And have them both be "not-terribly-enlightened" time periods? Ugh. I hope there are unseen adventures where the doctor takes her to spas and amusement parks for weeks on end and gives her presents to show thanks.

Then she walks the damn earth for the Doctor for a year. I remember watching The Last of the Time Lords for the first time quite vividly. I was in a Panera. I had met up with a friend that had been out of the country for the past year and only had a couple weeks before she was heading back to Asia for another year. We huddled together and watched the episode on my laptop the day after it aired. And I have to admit, I first thought there was going to be an "it was all a dream" reveal A LOT sooner than the "it was all reversed" ending. It just didn't ring true that Martha would do that. Or could do that. Her family had become slaves to a madman, her "hero" was turned into a feeble old man, and she was given this ridiculous mission... wha? But I've gone on about the episode before, so I'll stop here and just say... what a horrible way to spend a year.

How the hell did she recover from that year? From having memories of a terrible time that almost no one else remembered? How did her whole family cope? It always bugged me that it wasn't really dealt with more than a single line in one of her Torchwood episodes.

By the time The Doctor's Daughter ends, I can't blame Martha for being all, "Dude, I'm DONE. See ya!" but then she get's screwed again by not only having an untested teleportation device strapped to her, but she's given the horrific responsibility of killing everyone on Earth to save them from threat. Thankfully, she doesn't need to use it, but... OH MY GOD!

How has this girl not had a mental breakdown?! How is she not Theon in the beginning of season four of Game of Thrones at that point?!

Also... her and Mickey? Really? Really?

Anyway, I feel that Martha really got a shitty situation compared to the other companions. Yeah, she's one of the few that got to live her post-Doctor life the way she wanted to, but her time on the TARDIS was really terrible. I think her time with Shakespeare might've been the only adventure where her life wasn't directly threatened. I guess maybe that's how it has to be to be one of the few that walks away?

On the upside- she had the best clothes out of all the Tenth Doctor's companions. So, there is that.
Posted by Lamb at 10:03 PM No comments: