I love my car.

I got it due to shitty circumstances and totally didn't feel like I deserved it, which helped me love it even more. It's tiny and efficient and easy to find and has heated seats and can still hold the boxes for a whole IKEA dresser. What the hell is there to NOT love about that?

And I named my car Pedro: Son of Reptar.

The best part was that not only did I love my car, but small children loved my car. My niece loved my car. All elementary school age girls love my car, in fact. I never before have witnessed so many little girls stopping in mid-chase in parks to point at a car that I was drivingMattel might think that a pink convertible is a dream car, but I'm pretty sure a metallic lime green hatchback that looks vaguely like it was modeled on the head of a cartoon dinosaur is the actual dream car of little girls. 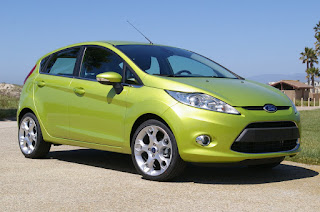 Note: Reptar from Rugrats and the lime green Ford Fiesta. Hence part of why I named my car "Pedro: Son of Reptar". The Pedro part came from the name I gave the lizard that died fused to the top of my previous car. It's a long story.
But poor Pedro decided, half way between Chicago and ISU, that sticking to one gear at a time was for losers. And that while being in all those gears at once, acceleration was for losers as well.

So, Pedro went into the shop. Then out of the shop. And then into the shop again this week. Computer error, transmission error, or shift lever- all are being corrected (thank goodness for long warrenties). And, only two days after taking him in, I was given a rental car. A super tricked out limited edition Edge which feels like driving a luxury hovercraft with touchscreen abilities. I'm tempted to try out the park assist but also terrified to try it out. Same goes for the system that alerts and prevents collisions. I did, however, test out the sunroof and the realtime fuel efficiency meter. And connect my phone to it via bluetooth for podcasts.

And now I'm just exhausted by the whole car thing. After getting Pedro fixed then him not being fixed and being too late to rent a car twice, I had to figure out how to be able to park the rental car near my apartment without getting a parking ticket and the more help I got the less helpful it was. My father was emailing with the village about sending faxes of the rental agreement and leaving passes at the police department, but we didn't get the rental until after the village office closed anyway. My roommate was told another story when she walked to the village hall in person. And then, in the end, I just had to park my car around the corner and call a service to make it so it wouldn't get ticketed or towed (and we'll see in the morning if that has actually worked).

While the Edge does have a few things improved from Pedro, I still miss him. Especially his fuel economy. 32-47 mpg beats 16 any day of the week.

I guess it's pretty good that he made it almost two years with no problems other than with the Sync updates (a Microsoft program having major bugs? What are the odds!). Hopefully, though, this will be the last of the issues for a while. He needs to get me to a lot of places in the next few years before he's paid off!
Posted by Lamb at 11:46 PM