On Sociology, Monarchy, and Traits of Merpeople.

The roommate and I talk about The Little Mermaid almost as much as A League of Their Own. We were both the perfect ages for it when it came out and it warped our minds wonderfully. I realized today that I haven't watched the movie in maybe five years (which was when we used a VHS copy that someone else gave to us, not the original VHS copy from my childhood, and were frozen by the awkward Jodi Benson music video), so I popped over to Listen To A Movie as I was suddenly wondering about a few things when it comes to the society presented for Ariel's people. 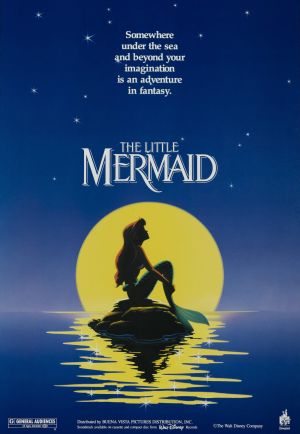 So, what was bugging me and drove me towards listening to it at work was the whole performance the princesses do at the beginning. What the hell is that? How often do they do that? Is their society one where women of money learn to sing, paint, play an instrument, and sew and not much else? Who are they performing for? The court? The whole kingdom? Is it just singing? Or is there more of a performance? Doesn't it seem a little too caberet/vaudeville/tacky for royal princesses to be doing?

When did Ariel manage to go missing? Was she originally in that shell and left during the performance? It seems like she just missed the whole performance. Did no one bother to check that she was in there?

And what, exactly, is Sebastian's job? He's introduced as a composer at the very beginning (with his full name!) but seems to be an advisor of some sort to Triton as well. And possibly a tutor to Triton's daughters? Man, that's a lot of hats for one crab. According to the prequel, he was Triton's attaché first, then (also?) the royal composer. Maybe if he had fewer roles in the kingdom, he wouldn't have started a performance with the star missing.

If life is that hard for the youngest of seven princesses, how tough are things on Aquata (assuming she's the oldest, as she's named first in their song)? Why was the sequel just a flip-flopped situation for Ariel's daughter and not expanding more on those six other sisters? What are their deals? Would Aquata even be next in line or does the crown only pass to the next male? Where were all those girls when Triton was in danger? Oh, hell, when Ariel went missing? They should've Charlie's Angelfish-upped to help!

Also, as the roommate pointed out recently: where did all this genetic variation in these seven sisters come from and what's the age span here? Are some of these daughters in their twenties still single? Triton seems super happy when Ariel has met a man, so maybe some of them are married but still live in the castle?

Although, while working on the age span possibilities, I then brought in the possibility that merpeople reproduce by laying eggs and that several and/or all sisters could be from the same laying and be the same age but with Ariel being the last to hatch. Apparently bringing in reproduction logics was a step too far. Again.

Also, what the hell is up with Triton's magic? Is it just the triton? Turning a mermaid into a human seems like it would be out of a magical triton's abilities. What is the triton's magic normally used for? Does anyone else (other than seawitches like Ursula) have magic or magical objects? Do the princesses get trained to use it?

1) OMG, I LOVE HOW IT STARTS LIKE A REAL MUSICAL WITH AN OVERTURE.

2) Man, that teaser poster for the movie is still amazingly striking.
Posted by Lamb at 12:00 PM