Previously In Space: Introduction, Part One, and Part Two

I'm pretty sure I've forgotten more information about astronomy and space exploration than I can ever try to learn again. I had a knack for finding Discovery Channel specials about space as a kid and getting sucked into them. And then I had an even better knack for finding alien movies I was too young to watch and getting obsessed/terrified by them.

I really wanted to work for the SETI Institute when I was about ten-years-old, because of a Discovery Channel special. "Even after Contact came out and made it sound like all there was to SETI was listening to radio static and arguing with bureaucrats?" You ask. Yes, I still was in love with the idea of working for SETI. And now? Some days it still sounds ideal. I mean, at least it's a non-profit that doesn't deal with government funding and is about something I find interesting. Not that I don't find other non-profits that I might currently work for interesting as well. Um, anyway... SPACE.

A few years  after the whole ficus plant experience, my sister and I had our own little twenty minute personal War of the Worlds moment. We were reading each other to sleep and one of us was flat in the bed, looking out the window above the bed and staring at the sky. And noticed there was a star that was... moving.

I'm not going to say which one of us it was that panicked, but I will mention that twenty years later, my sister (who is six years older than me, please note) once called me just to ask if I heard voices because the children on a "docu-drama" about psychic kids reminded her of how weird I am. This is our relationship.

But we basically freaked each other out by both seeing a star (something that obviously was not an airplane, as it wasn't blinking) that was moving and assuming that the aliens were circling the earth and we were the first to notice.

Thankfully, our first line of action was to tell our dad. Who then marched us outside to stand beneath the bedroom window and tell him where to look.

And then, of course, he told us it was just a satellite.

We went to bed, still slightly convinced that by morning the planet would be enslaved by aliens. And then completely forgot the experience by morning.

Well, for the most part. Until the next trip to the local mall where I saw a telescope at World of Science. Which was my favorite store in the mall for a good chunk of the 90s. So much stuff to touch! I got a giant goopy sticky neon blue slug thing! And then the store became Natural Wonders, which was still pretty good to kid me- I could still play with everything in there! It's just that there would be rain sticks and cds of whale songs but would also have like... fun magnet products and squishy brain-shaped toys. And the telescope. It was gorgeous and was $100. Which, to an nine year old, might as well be $100 million.

I knew nothing about what qualities to look for in a telescope other than the one on display at the mall made it so I could see into the Disney Store on the other side. Good enough for me! If I had a telescope, I could've SEEN if it was a satellite or space invaders (although, I don't think I'd be able to tell the difference even if they were ten feet from my face in most cases. If that were to be a thing.) and been prepared if it had been an invasion! I needed a telescope to help save my planet!

This also happened to be around the time people were talking about the Hale-Bopp Comet. Which, the more I heard about the more obsessed I got with it. And, back in the days when AOL was 90% of the internet- people were still confusing the Hale-Bopp with Halley's Comet and would send tiny me into my first fits of nerdrage.

And the closer it got, the more I wanted that telescope. My memory is foggy, but I'm pretty sure my parents made me pay for it- at least partially. I think I might've requested to start an allowance system and a payment for good grade system for the first time in my life. Some of the money might've also come from my First Communion money. I don't think they really had any objections to buying their nerdy child a telescope but that the issue was more than it was probably a few months after they splurged on buying a Sega Genesis.

But, eventually, I got it. Just in time for the first time the Hale-Bop was starting to be visible. I set it up in our yard and learned how to perfectly walk across our yard without setting off the motion sensor for the light above our driveway. I twisted all the nobs, I attempted to comprehend the user's manual, and I figured out where it would be the clearest... only to never be able to get a great image from the telescope.

I thought it was just me being a dumb kid, but my dad couldn't figure it out either. It was probably, most likely, a combination of actually being broken right out of the box, not being meant for stargazing, and of just stupid shoddy construction. But we tried our best to make it work. There was a lot of "Is THAT it?" "No, that's a star." "How about now?" "No, that's a satellite." "How about now?" "That's a smudge from your finger."

Eventually, a year later when Hale-Bopp was at its brightest, we had pulled the telescope out so much that we were able to get minimal results. We were able to find Hale-Bopp with the telescope and see it as a shaky blurry ball until it moved out of view. It was so slightly impressive, that we had other family members come over to our house to view Hale-Bop and eat slice-and-bake Easter sugar cookies. Which, to be fair, is a much nicer memory to have compared to how most people hear "Hale-Bopp" and either go, "Is that another name for Halley's Comet?" or "That's the Heaven's Gate thing, isn't it?"

I think the only reason why I knew the phrase "Heaven's Gate" was due to Saturday Night Live. I don't think, as a child, I even realized that people had actually died at the time. Did SNL do those jokes after the deaths? I have a feeling at least the fake KEDS commercial they did was after the deaths. Yeesh. Edgy? 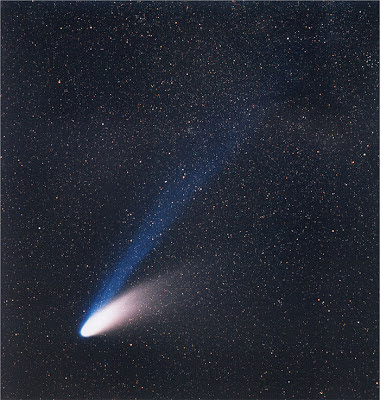 As I said, that was barely on my radar- my focus was on the slightly impressive comet itself. I wanted to see what a giant hurtling ball of ice in a vacuum looked like up close! All I saw was a shaky ball of light that was slightly bigger than all the other shaky balls of light in the telescope than to the naked eye. I wanted to see the damn sodium tail and be able to go, "Yup, that's definitely a tail made out of sodium!" by looking in the telescope.

How was I ever going to protect my loved ones from an alien invasion if I could only just barely tell one shaky blob of light from the next? My sense of reality was clearly shaky from the beginning.

I might still be bitter about that telescope. Also, I'm now wondering if my parents still have it.

Also? I'll be reading Contact for the first time this March. I don't know how I let the book go unread this long. Shame on me.