So, when I hopped onto Facebook this afternoon while in the waiting room at my doctor's office, I expected to see a lot of commenting on the new pope- as I knew there had been white smoke but had not yet heard any further announcements. 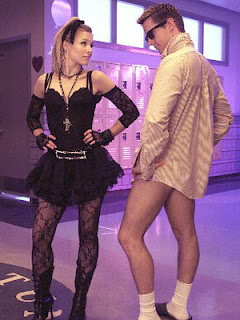 Instead, my newsfeed was absolutely SWAMPED with people sharing the Kickstarter link for The Veronica Mars movie. Some people, like one of my cousins, I didn't even know were fellow fans of Neptune's Girl Detective.

Back in 2004, this is essentially how I fantasized that Joss Whedon could've brought back Firefly. I essentially thought that there should be a way for fans to basically front/pre-order a short second season of the show that would be released either straight to the internet or straight to dvd. I remember debating with someone about if the average fan would pay $30+ for a season of tv that they didn't get to watch until well after they paid.

It's going to be amazing, no matter what, to see what the total is on April 12th. I bet Rob Thomas is currently feeling a sense of validation that makes mine look like a grain of sand, though. For years, he has probably been told that he just didn't have a big enough audience and that he was lucky that his little show lasted as long as it did. And now... boom. Also, major props to both Thomas and to Warner Bros. for being able to consider going super low-budget in the sake of making something great. If this is as successful as it has the potential to be, it could mean some big change-ups to how the film industry could finally revitalize itself by focusing more on small and/or micro-budget passion pieces as well as make things interesting in how built-in fanbases are connected to the films that will eventually be marketed to them. 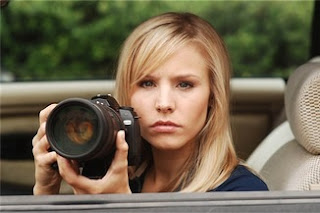 As for knowing that we're a year away from seeing the sassy Miss Mars again? It's so sudden!

Even though, clearly, this has been in the works for a while (the Kickstarter video was obviously recorded before Kristen Bell was pregnant- a quick read of the EW article from today reveals that they filmed it February of 2012! Holy crap!). I just don't know what to think. I know I'm happy! But how happy am I? I'm a little sad that I'm in a tight money month and can't contribute yet (yet!).

I'm wondering if it will be as good as it has the ability to be (like the first season of the show) or will be decent and okay-ish (like the third season. Or, say, the movie version of another TV show that I might've already brought up in this post. But maybe I didn't say that? It's a decent movie, just not great. I mean, the sound design has some major flaws. We all know this, right? Let's just pretend we don't. I didn't say anything...). But I'd kinda be okay with decent and okay-ish.

Actually, I really would. Because, you know what? I miss seeing Kristen Bell play Veronica Mars. Because Veronica Mars is an amazing character and has made it so every other character Bell ever plays, is a let-down after the amazement that was Veronica. 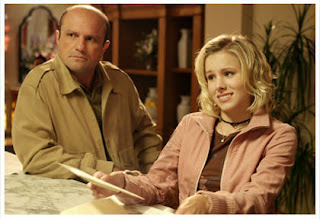 On a more personal note, it has been a nice evening of nostalgia with all the internet talking about Veronica Mars because the show was one of my favorite shows to watch with my dad. Because it really is a great father-daughter show.

The relationship between Keith and Veronica was probably the strongest of any relationships of any sort on the show and it was always the most interesting one to see be played with. I know other people were all about Veronica and Logan but those puppydog eyes have nothing on seeing Keith Mars trying to wrestle with his emotions when Veronica would do something that was great as a detective but really stupid as teenage girl.

Between Veronica Mars and Gilmore Girls (our other major show to watch together- again, with a strong relationship between a parent and child), we had a great three years of shows we both really liked. And tonight it's been nice to be trading article and webpage links with him about the show we both like. It's a lot more fun than watching Flashpoint with him.

Man, I hope someone in the Chicago area purchased the $5000 "we'll rent out a local theater and show the movie" package (and is looking for some friends to pad out that 50 person theater. Hi, future BFF!)
Posted by Lamb at 12:13 AM