Spacing Out, Part Four: The Sky Was Falling

Halloween 1994. I didn't go trick-or-treating that year, for whatever reason. Instead, I spent my night watching the craziest scariest thing on TV that I had ever seen at that time. Something that, when I mentioned it the next morning, no one else at school had watched it- which made it seem even freakier to me. For years, it was filed in the back of my head- something that I hoped was just a forgotten TV special or odd nightmare but might've been, in the end, something terrible that happened yet only I remembered- like from an alternate reality. Or something. In the 2000s, I'd occasionally search the internet to see if anyone else remembered it. Never finding anything helpful.

Until 2011. A friend and I were talking about seeing scary movies too young in life and not being able to process our memories from the scary movies. I brought up that phantom memory of a Halloween special. That's when we found it (the entire thing!) on YouTube: Without Warning.

And even he agreed, after watching clips, that it was kind of messed up, awesome, and terrifying at the same time.

At that age, I still wasn't quite sure if Murphy Brown was completely fiction or not (to be fair, the show didn't have a traditional opening credits sequence to tell you the actors' real names- it was all done in the bottom portion of the screen under the first scene)- and this thing didn't ever break away from the news format. And it was, by far, the most interesting the news had ever been to me in my nine years of life. I couldn't stop watching. Apparently, at the beginning it flat-out said that the following program was a work of fiction but I think I missed the beginning of it (as did quite a few people in Arkansas, from the looks of the movie's Wikipedia page).

But my dad didn't seem all that concerned and he was watching it, too, and I kept checking his reactions for if I should be freaking out or not. I can't remember if I ever bothered to actually ask him to tell me if it was real or not. I might have. But, being me, I might have also assumed he was lying to comfort me. For the most part, I didn't really freak out but just had the deep pluck of fear in me saying, "but how do we know for sure that this isn't real?" and being thankful that our family room was in a basement, just in case.

Then, we reached the end of the program. Which is fucking haunting.

It's just the image of Sander Vanocur, a real news anchor with real gravitas, staring straight into the camera as panicked audio from Johnson Space Center is heard during his final words to the audience and the newscast signal starts to cut out... then just ends.

The screen went black and I remember holding my breath until a commercial started. I stayed completely still for a bit longer, trying to feel if the ground was shaking. Forgetting that there were trick-or-treaters still outside and, had something major happened, there would likely be some screaming heard. 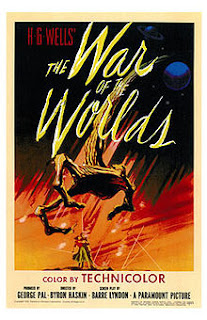 I had no basis for seeing something like that. I hadn't yet heard about Orson Welles's War of the Worlds broadcast that this one was obviously an in-spirit homage to. I'd never seen a terrifying event on the news before. I was way too young to witness the Space Shuttle Challenger disaster. I didn't even know about the 1993 World Trade Center bombing when it happened. I never heard about any such things until the Oklahoma City bombing in 1995.

So, Without Warning took up residence in the back of my head for the rest of my life- so that every time I saw a movie like Independence Day, Close Encounters of the Third Kind, or even flippin' Armageddon and even Signs, I had an immediate associated reaction that automatically flooded my senses and made me feel like I was still that kid watching TV on Halloween in 1994. A luxury, I guess, compared to how other people got that mix of dread and fear for the first time due to something in reality.

When I did later in school heard clips of the War of the Worlds radio show and read news reports about the real panic it caused, I immediately thought back to the mythical Halloween special that I wasn't sure really ever happened. And the same odd mixture of dread and excitement filled my chest just hearing about it. That might be why I find the reality behind what happened with Welles's broadcast to be so fascinating, so many years later and how I wish someone would do a new movie based on that night. But that's another story for another time.

Without Warning is also probably part of what had me go through a long phase of "what would we do if there was an alien invasion?" questioning to my parents (replacing my "but what if they DO bring dinosaurs back to life?!" phase). It definitely got worse after Independence Day, as I remember having the conversation with my dad and he just flat out made it sound simple: Since the Independence Day aliens hit major cities, we'd go bunker down with family in Central Illinois with farmland and just hide in basements with canned food and preserves until it was over.

It's pretty obvious that my father grew up during the duck-and-cover 50s. It still sounds like a pretty good plan, though. It's a wonder that a sensible man like him ended up with a kid like me.

But it really deserves praise for being able to do so much while showing so very little. When they're dragging out the moment of "OH FUCK" at the end just by showing the reactions of people long before the cameraman is finally instructed to turn around and show what everyone is seeing? So amazing.
Posted by Lamb at 7:00 AM