Back to Who: An Adventure in Space and Time 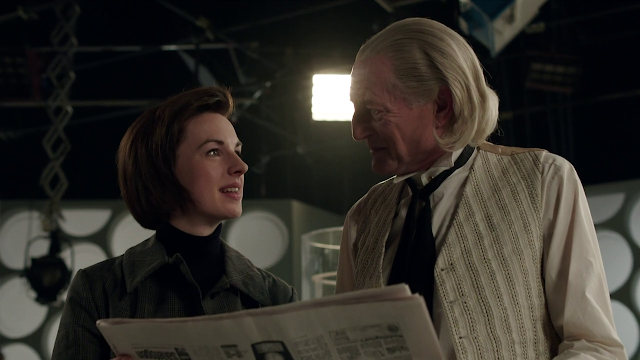 As part of the celebration for the 50th anniversary of Doctor Who, the BBC and Mark Gatiss gave a world a wonderful gift: the TV movie An Adventure in Space and Time. About the creation of the show and the amazing legacy that William Hartnell, Verity Lambert, Sydney Newman, and Waris Hussein started.

If you know the name "Mark Gatiss" at all, you know that he is one of the most devoted fans of  Doctor Who- David Tennant often credits Mark Gatiss as being the first adult person he knew that every made frequent casual references to Doctor Who episodes in every day life. And Gatiss's devotion shows in the beauty, respectfulness, and love that comes through in every scene. It's just a shame that it wasn't a longer special and couldn't go more into detail.

The special starts by focusing mostly on Verity Lambert, who should be known as the Mother of Science Fiction Television, if you ask me. She's played brilliantly by Jessica Raines of Call the Midwife and, to show my shallow side, wears the most amazing 1960s clothes all throughout the film. It focuses briefly on how Newman took a risk in making her a producer- the youngest producer ever at the time at the BBC and also the first female producer. But it could go into it more. I hope that one day there will be a biopic entirely about Verity. Wikipedia tells me that there's a student film about her with the amazing name of "Verity: Men, Bitches & Daleks" but that's not enough.

The true focus of the film, however, is William Hartnell. Which is rightly so and also heartbreaking. David Bradley plays him so wonderfully- straddling that line of crotchety and magical- and by the end of the film, I was more misty-eyed than I had been about anything Doctor Who-related than I had been in ages. There's something so lovely about seeing the journey of a cynical man that thought his best days were behind him, only to suddenly find himself to be more adored than Santa Claus.

In many ways, this tv movie was what I was looking forward to for the longest time in reference to the 50th anniversary. And I'm not disappointed by it- I just wish there was more. And I wonder how it would play for those that don't give a damn about Doctor Who. Like my mother, who adores Jessica Raines and would probably love to see anything she's in. But doesn't even know that the shape of my minifridge is a "thing", let along a TARDIS. And the film only barely bothers to stop and explain things that the uninitiated wouldn't know, which makes me think that it might not be the greatest idea to test it out on my mother.
Posted by Lamb at 8:00 AM