Cut Your Own Damn Bangs. 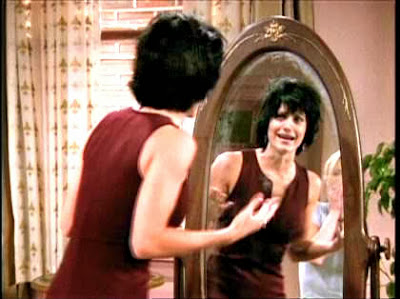 In the past decade, whenever I have requested bangs to a hairdresser, they have been reluctant. Even when a dear friend of mine cut my hair, she was hesitant to give me full-on bangs.

Now, I understand it to a point. Pictures of me from ages 6 to 12 are pretty good evidence for why I shouldn't really have bangs. But that had more to do with the terrible helmet-like bob cuts that I had with those bangs while also not being allowed to wield a curling iron yet.

Since those days, I've gotten pretty good with my hair. I understand what different brushes do to it. I can french and dutch braid. I can do a lot with a single curling iron.

But hairdressers still will never go full-on with bangs. Except the one time where I let a woman that barely understood English give me a $10 bang cut and she gave me really uneven baby bangs rather than "just above the eyebrow" like I wanted. All others will basically give me nothing more than short layers that can work as bangs for about a week before they grow out too much to work with.

And when I got my hair cut this past August, once again I had a hairdresser that was hesitant to give me bangs. I convinced her on the grounds of trying to frame my face to thin it out a little, as I have a round pale Irish pie face that is made worse by frequent swelling in the jawline from my TMJ problems. I need my hair to make it not quite so daunting and terrible to see.

So, the hairdresser gave me some angled long fringe into some long side pieces. But it was rather thin and, when I went to style it the next day, I realized that she hadn't been very precise about where she got the hair for the fringe from. Which seems to be the case when it comes to giving me haircuts. I don't understand why, though, as it's pretty easy to see if you made a straight part in my hair as my hair is so dark brown that it's almost black and my scalp is so pale that it almost glows.

Over the past few months, I bought a cheap pair of trimming scissors. I mostly just tried to keep trimming the fringe to keep it out of my eyes and also try to even it out a little bit into more of what I was looking for. But I didn't want to go crazy with it, as I've had my fill of "I let my sister cut my hair and now I have this one chunk that's mysteriously too short for my ponytail" moments.

Until today. Armed with nothing but hazy memories of a "how to give yourself bangs" guide that I read online over a year ago, the cheap scissors, a mirror, and a terrible mood motivating me more than ever- I just did it.

And I did a pretty awesome job!

It did take hours to get it perfect, however, as the key to not fucking it up was to do a lot of tiny trimming with the scissors almost completely vertical, something I had picked up from the few times I could get a hairdresser to cut me some bangs. They're not as super blunt looking if you do it that way and easier to play with and cover minor uneven-ness. It possibly also creates texture.

The other thing I did was carefully map everything out. I found the center of my face and, using the pointed end of a make-up brush, I etched out a perfect triangle in my hairline, with the point lined up with the center of my face. I pulled the rest of my hair into a ponytail. Then, out of the wide triangle (think Zooey Deschanel-style), I carved out a smaller rectangle in the center and pinned back the rest of the triangle for later. Basically, I first cut a pretty uniform set of straight bangs that went just the width of my eyebrows and were just above the rims of my glasses. Then, I unpinned the triangle and let those have some more length to them so that they skim the rims of my glasses for the most part and then go longer on the sides.

It's hard to explain and I'm not putting pictures of myself up here (too incriminating about other parts of my life- like who I am). But it worked out really well. This way, I can have thick and full straight bangs  covering my entire forehead and framing the sides of my face without pulling out the curling iron to fix them.

BUT! I can also style them as slightly side-swooped, which is what really looks best on me. And, best of all, I can do it from either side- which was not an option with what the hairdresser had given me. To add to that, because I made them thicker and start further back on my head than previously, they're also easier to fluff and fix.

The biggest downsides to the self-cut:

1) Uh, I did it in my bed. So, I had to shopvac the bed and change my clothes to stop itching.
2) My scalp in the front of my head is now very sensitive from excessive brushing to make sure the hair was even as I was trimming. Ow.
Posted by Lamb at 7:15 PM