Hey, Look, The Round Things! The Day of the Doctor

I don't even know what to say. I'm almost twelve hours late in seeing it, due to adult responsibilities. And I really shouldn't be trying to express anything about it so soon after watching but... well played. Very satisfying.

Yes, there were still issues.
There will be outcries about little this and little that. Several self-indulgences that may age poorly. And, to be honest, I'm getting annoyed with how frequently old footage is being used to make it seem like previous Doctors are involved, despite how it's really far from seamless. Especially since, after this, my inner twelve-year-old almost can't help but think, "Couldn't David and Matt pop in every so often to record some new footage for flashback-y stuff for their characters once Capaldi takes over?" Hell, Paul McGann and John Hurt could as well, it seems.

But, that's besides the point. The point is that not only did Moffat provide a story that is going to provide new structure and possibilities to the show in a way that hasn't been seen since the 2005 reboot started, but he righted some very old wrongs. 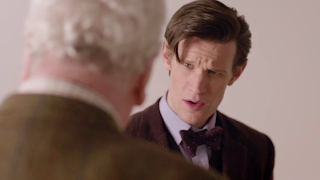 I am, of course, not talking strictly about the plot of the special but of what happened at the end. A (understandable but heartbreaking to fans) decision made 30 years ago was righted by this special. And it just might be the absolute best thing that Steven Moffat has ever provided to his fellow Whovians. It was handled with amazing respect and wisdom and I applaud Mr. Moffat for pulling it off and also having the forethought, for once, to throw in a little bone of a glimpse of the future.

As for the actual story, it was pretty well done. Sloppy structure and muddled pay-off, but the focus was character, not the structure. And it didn't completely fuck over the past of the show, which is the really impressive part. I said "didn't completely", mind you, as I know there'll be people freaking out about it no matter what. It also deserves applause for actually addressing why Tennant and Smith's Doctors are the way they are in comparison to the Doctors that came from the pre-Time War era. It's a shame that Eccleson is so determined to distance himself from the show, but his inclusion would've muddled the thesis anyway.
Posted by Lamb at 1:26 AM