Four Out of Ten 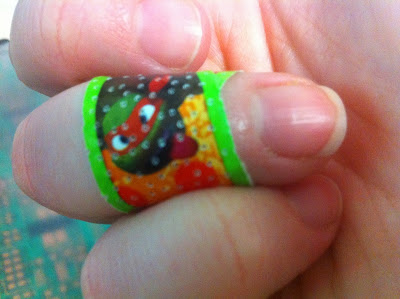 In the past week, I have injured four fingers. And one of those four has been injured twice.

And when I say "injured", I don't mean anything severe like breaking a finger. But I have bled a decent amount in the past week.

I burned a knuckle making a hot breakfast. It blistered and then scabbed, and due to it being on the knuckle, the scab keeps opening despite how I keep putting Neosporin and coconut oil on it.

A similar looking injury is on the upper knuckle of a finger on my other hand. I wasn't paying attention to wear my hand was and a co-worker ended up slamming a drawer closed on my finger. I played it off as nothing until it started bleeding on items I was wrapping. I'm just thankful that it didn't blacken the nail bed, as the whole upper portion of that finger was smashed but only the knuckle shows any signs of it. This scab also keeps opening- much more than the burn, in fact.

That same finger was scratched a few days later at the base. I can't remember what did it, at this point, but I remember it being something that I didn't think could scratch me.

The third was pinched in the flush knob of a toilet at my office. I have never run so quickly to disinfect an open wound in my life.

The last injury was on the same day, from a sharp corner of a metal cart. Again, something I didn't expect to cut me. Again, I raced to find a first aid kit to disinfect the cut, as I have no idea where that cart had been.

And, in all these injuries, I have come to the conclusion that adhesive bandage technology sucks. At first, I thought it was just my Batman and Teenage Mutant Ninja Turtles bandages being cheap (although, seriously, the artistic design of the TMNT bandages is AMAZING. The one pictured above is basically a design of Michelangelo photo-bombing the design on the one end- so that you can wrap a finger with the pad on the pad of your finger and have Mikey on the front of your finger. It's fantastic). But I have gone through so many bandages this week to keep from grossing people out and not a single one has lasted a full day. And it's barely a couple hours if I put Neosporin on under the bandage.

Why can't these things freakin' stick?
Posted by Lamb at 10:59 AM