Sometimes I like love stories. Just not super often. But when I do, it's often when I'm feeling my moodiest.

At some point in my teens, I had a few certainties that just appeared in my mind. Be they weird mis-fires or what, they happened. They weren't all correct- I was certain I would die before my nineteenth birthday, for one, and that's clearly not what happened. I was certain I would eventually run away, which I did... before running back for two years.

I was also certain that when I did finally find the love of my life, it would be with someone that was bipolar with severe mania.

It's quite specific, I know. And I've managed to yet to actually achieve that. I have never fallen in love and I've yet to have a romantic relationship with someone that is bipolar with manic episodes.

I have, however, had some amazing friendships with more than one person with tragic mental illnesses that have made our friendships all the stronger. I gravitate towards people with intense emotions and I have been that way my whole life. I don't know if I quite realized that during my teens yet, though.

But, I will say, that a couple years after that certainty planted itself in my mind... season four of Ally McBeal happened.

I probably need to explain that further, don't I?

My father watched Ally McBeal regularly as did a great amount of people in the late 90s. My father watched it mostly for the musical element of the show but the show did seem mildly amusing in the 90s. I would watch with him, rolling my eyes at Ally's man-hungry ways and not understanding her motives at all. But I found it amusing for the most part, not realizing how disgusting most of the characters were in a human rights point of view about quite a few "funny" topics (like any time a LBGTQ character appeared or any character with a diagnosed serious disorder).

But then came the fourth season. And Robert Downey Jr came with it. For those of you that don't remember this time in history, Downey had just spent about a year in prison after being in a Lohan-esque spiral of missing a few court-ordered drug tests that were part of his parole agreement. The lawyers that got O.J. off could not save him from a year in prison, that's how damning the situation was.

And, a week after he was released from that long stay, he was hired to be a new cast member on the fourth season of Ally McBeal as Ally's new love interest. Because that was David E. Kelly's hiring style.

And he was... amazing. He was the male version of a Manic Pixie Dream Girl. 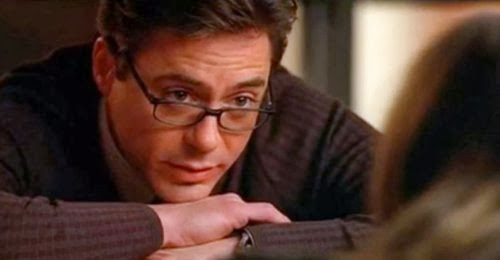 He wore plaid shirts with suits. He had adorable glasses that matched his outfits. He had Robert Downey Jr's amazing thick eyelashes that make it look like he's wearing eyeliner. He was quick and funny and quirky and just... got people. He played the piano and sang (he sang Joni Mitchell's "River" when he thought no one was listening). He built Ally a snowman version of himself to keep her company while he was out of town. He was broken and sad at Christmas because he was also anastranged father to a little boy. Hell, he even had great kind relationships with both the mother of his child and his ex-wife. Also: he was Robert Downey Jr- do I really need to explain the charisma more? He was universally adored for his performance on the show, needless to say.

It was in that character, I now realize, that I saw the embodiment of the imaginary love of my life that I had imagined for myself (and doomed myself to).

Now, like I've said, I have yet to actually fall in love. I'm not looking for love and I'm not too keen on the topic. But November is difficult for me. And I've found myself watching that season of Ally McBeal on Hulu (and have now seen the same ad for NickMom so many times that I have lost all fondness for Tia Mowry).

I thought I just had a thing for Robert Downey Jr but I tried watching some of my favorite RDJ movies (other than the Marvel movies or Kiss Kiss Bang Bang) and it just wasn't the same.

But I do know that, no matter how much the character of Ally McBeal bugs the hell out of me, I do feel a sadness for how the season ended- more for how it ended in reality than how it ended in the show. As you might remember, Downey had not quite finished his downward spiral and was arrested two more times and found to be under the influence of drugs during his time on the show and was fired at the end of the season and the wedding between his character and Ally was scrapped (however, the season finale was still called "The Wedding" and I have to wonder if that was because the title had already been released or if it was David E. Kelly being weird/funny/whatever).

The next year, the ratings plummeted. Jon Bon Jovi as the new love interest just wasn't the same. The cast was itching to move on. The show was canceled. And, as a viewer, you just felt bad for everyone involved, as the show had clearly gotten reinvigorated the previous year, only for life's harsh realities to step in. Like when you date someone who seems amazing and draws you into their fantasy world only for everything to come crashing down when they go into a manic depressive spiral that you weren't expecting and can't fix.

And I'm still watching old episodes of this stupid show for this one man. Like those creepy old ladies that talk wistfully about their lost loves and stare at their old pictures.

I have no idea where I was going with this. Other than I need to remember to go into my Hulu account settings to hide all the Ally McBeal. And that I fucking hate that theme song.
Posted by Lamb at 8:16 PM