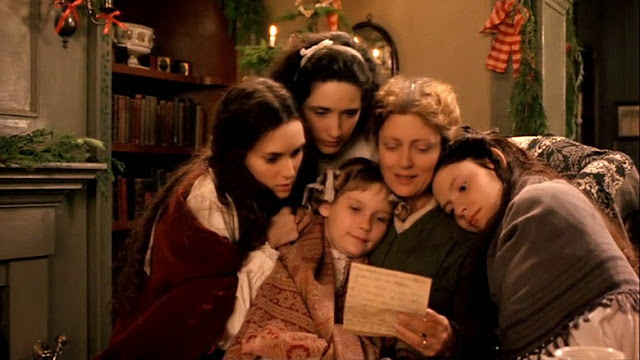 During Christmas break in 1994, my mother took my sister, a friend of hers, and me to the movies. I, being 9-years-old and stupid, wanted to see Richie Rich. My sister, being 15-years-old and in her "deep teenager" phase (or, possibly, her "Winona Rider is the best!" phase), wanted to see Little Women. Our poor mother, realizing that it wouldn't look good if she sent the 9-year-old into one theater and went into another theater with the teenagers, went with me to see Richie Rich.

She slept through it, as she had done through The Flintstones Movie, The Santa Clause, and numerous other kid movies before.

And once the movie was over, my mother did something I never expected her to do: she took me across the hall and we went and watched the last forty minutes of Little Women. WITHOUT PAYING. Then again, I made my mother sit through Richie Rich. So, maybe she felt she might as well get something redeemable for the money she spent on her ticket- nap or no nap.

I wasn't completely unfamiliar with Little Women. When we had first heard of the movie coming out, I was interested in reading the book. And, after getting a few chapters in, I realized that it was going to take the rest of third grade to finish the book and decided to instead read several smaller books during that time and turned my copy of Little Women into a flower pressing book (because I was that kind of child).

But then I saw the end of the movie and immediately insisted to my mother that we come back before winter break was over and see the movie from the beginning. I had no idea how the story got to that point from starting with four teenage girls selflessly choosing to buy their mother Christmas gifts with the money meant for themselves (about all I could remember from the book), but I wanted to find out.

So, we went and saw the movie from the beginning a few days later. My mother, a fan of the book and the June Allyson film, did not sleep through this one. While I was very surprised to find a very different movie in the first 70 minutes of the film.

But I loved it.

I think we might've seen it again in the theater a few weeks later. By the time it was released on VHS (the next winter, I think), I had seen the June Allyson version of the film and read the rest of the book over my summer vacation. I loved the story, but along the same lines as how I loved the Little House on the Prairie books- a romanticized peek at a way of life from another time. And I think that might be how most people view the book.

In recent weeks, I switched out my usual Jane Austen and L.M. Montgomery audiobooks from my sleep schedule for Little Women. Some odd urge to revisit the story mixed with the realization that it's a pretty darn long book.

And, in doing so (not to mention actually listening to it when not intending to sleep), I started to realize that there was a lot more going on with Little Women. I had known, vaguely, about Louisa May Alcott's connections to the transcendentalism movement (which is name-checked in the 1994 film, despite how I think it's never full-on named in the book), and some of the most memorable parts of the book- like the beginning where the girls decide to buy gifts for their mother rather than for themselves- I didn't realize that so many of the later parts of the book are basically transcendentalist lessons. And while the movement is mentioned in the 1994 movie, it's not focused on nearly as much as the feminist and human rights issues are addressed.

One of the sections of the book that always stuck with me but that I didn't really understand as a kid was the part where their mother lets the girls "do an experiment" where they don't keep up with their chores during a vacation. Alcott describes the girls as embracing the experiment but also feeling that something is not quite enjoyable about the lack of responsibility. They don't completely hate the experiment until their mother goes away for a day and also gives Hannah the day off, making it so no one is cleaning up anyone's mess or even lighting fires for anyone.

As a child, I thought that section read similarly to the Mrs. Piggle-Wiggle stories, where naughty children are slyly taught to lose bad habits. A mother playing with her children.

But, really, it's Alcott attempting something more there. And I'm kind of surprised that the book isn't considered more controversial for being somewhat subversive- as what the movies portray is a much more straight-forward story: a once prominent now poor family of strong women struggling to take care of each other during the end of the Civil War era. But the book is much more blatant about the March women having the mindset of "Okay, so we're poor- how can we challenge ourselves to take this as an opportunity to prove that we can still help others even with as little as we have?"

Really though, I probably am just late to the party any everyone else has already realized this about Alcott. Now that they're thinking about making another film version (it has been almost 20 years since the Winona Ryder version!), I do wonder if it's going to come into play.
Posted by Lamb at 7:30 AM